During the 1930s, LA’s decorator to the stars was William Haines. A leading MGM actor himself in the 1920s, Haines made a smooth transition to the world of decorating in the early 1930s helped by his movie star contacts and sparkling personality. He entered the LA decorating scene at the top and remained there throughout his career.

Haines’ early style was Classical. “I loathe cozy cottages,” he once said. “they were made for farmers and peasants, not ladies and gentlemen.” He introduced French and English antiques- a welcome antidote to the often gloomy Spanish colonial interiors of the previous decade. He then began to add touches of chinoiserie- which he particularly loved- and Regency, as well as a stream of innovative ideas of his own.

His office on Sunset Boulevard, which was later to become Le Dome restaurant, was a flamboyant showcase for his designs. During his pre-war period, Haines did houses for a stream of Hollywood clients, including Leila Hyams and Phil Berg, Jack Warner (whose house passed on to David Geffen, and then recently to Jeff Bezos), Carole Lombard, William Powell, Norma Shearer, William Goetz, Joan Crawford and George Cukor. For the latter he teamed up with James Dolena- who had just designed a series of houses with interiors by the brilliant Englishman Robsjohn Gibbings- whose witty, part Regency-part neoclassical designs influenced Haines.

Jean Howard Residence, Beverly Hills, 1943
I met author/photographer Jean Howard a few years before she died in 1990, aged 80. We became friends, and my wife Annie Kelly and I enjoyed lunches from time to time on her terrace. She was charming and still attractive. As a young actress she had performed with Ziegfeld and appeared on Broadway. Moving to LA she studied photography at Art Center, and married the celebrated agent Charles Feldman.

In 1942 the couple hired Billy Haines to decorate their new residence in Beverly Hills. Following the death of Feldman in 1968, Howard continued to live there, its interiors remaining unchanged, for 50 years until her death in 1990. Immersing myself in these charming, original, interiors with camera in hand, was to visit a time capsule: the ’40s period green walls, the sprays of cigarettes on the dining table, and the displays of candid photos taken at Hollywood parties she hosted during their years together. These placed her in the midst of the Hollywood elite, as featured in her book ‘Jean Howard’s Hollywood.’ At home she entertained everyone from Richard Burton to Judy Garland and Cole Porter. She also hosted a party for Presidential candidate John Kennedy, where she ended up making him breakfast à deux.

Bloomingdale Residence, Holmby Hills, 1957
While producing my ‘The Los Angeles House’ book, (published in 1995 by Clarkson Potter), Tony Duquette suggested that I see his friend Betsy Bloomingdale’s 1950s Billy Haines-designed residence in Holmby Hills, and he very kindly arranged an introduction. Thanks to Tony I was warmly welcomed by Betsy and invited to take pictures. The high style Haines interiors were remarkably still intact, unchanged since 1957. Classic period interiors like this, surviving intact through the decades, are rare and exciting.

In 1957 Bloomingdale heir Alfred Bloomingdale and his wife Betsy purchased a 1920s Spanish Colonial Holmby Hills mansion by architect Roland Coate, hiring Billy Haines to renovate the house and create new interiors. The existing exterior facade did not correspond to Haines’ high-fashion tastes, and was given a Hollywood Regency redesign. In Haines’ partner Ted Graber’s words, “We came in and removed the mantilla, giving the house a classical look”. The interiors were decorated with Haines furnishings, interspersed with furniture collected by Betsy.

At the rear of the U-shaped house Haines designed a trellis-covered loggia and colonnade linking the living room at one end with the dining room at the other. This opened onto a lawn extending to an axially aligned pool and pool house. This was created, said Graber, “as a classical pavilion with the spirit of a folly”. Pool house furnishings were set around a central fireplace.

The Bloomingdales entertained lavishly, hosting Kissingers, Paleys and Reagans interspersed with a sprinkling of Hollywood glitterati. Following the death of Alfred in 1982, Betsy remained here until she died in 2016, with no need of anything more than an occasional sprucing-up by Graber- an indication of Haines’ skill in planning and good design. The house is now owned by Tom Ford. 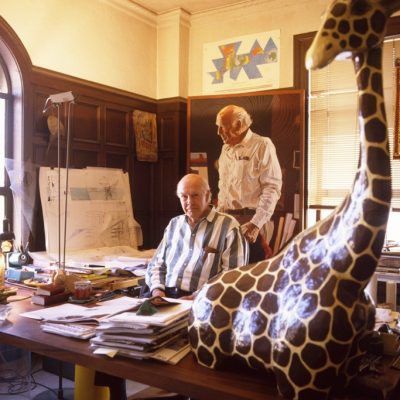 John Lautner was affable and charming. My several meetings with him were brief and towards... 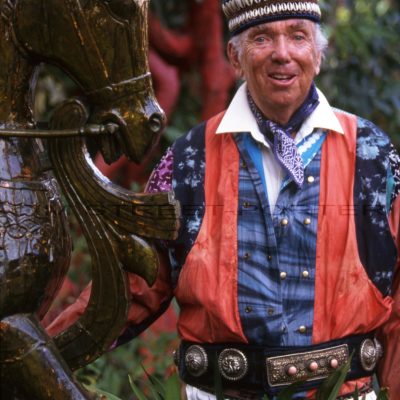 This month I’m focussing on the remarkable Tony Duquette, who became a personal friend of...